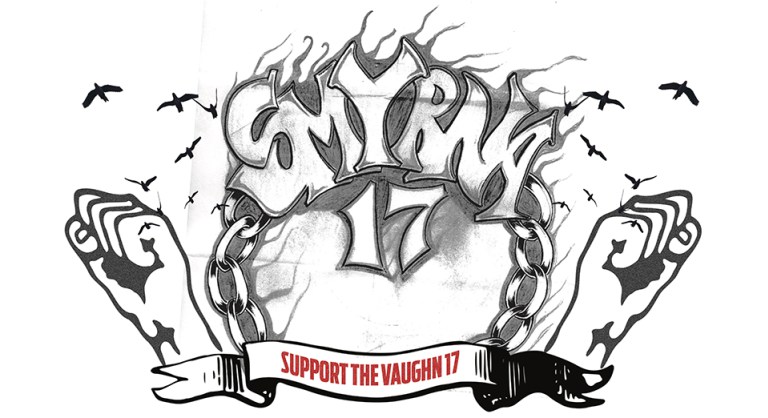 Everybody pled not guilty and chose trial by a jury except for one co-defendant by the name of Royal Diamond Downs aka Master Splinter, a former BGF member and Baltimore native. Not only did this cowardly snitch fabricate his story and just blatantly outright lie on others indicted, but he’s an ancient RAT, meaning that he snitched on some boys back in the day.

About 14 years ago, he was transferred from Maryland to Delaware in a state agreement for snitching on people in Baltimore in another riot case. As far as him being a RAT in Delaware for 14 years without people knowing, well, that’s another story.

But dig it, how is it that the prosecution can make an agreement and utilize the testimony of someone so unreliable and untrustworthy to assist in obtaining a conviction in a court of law? Whatever happened to procedural due process and upholding the integrity of the court?

It’s not like we’re talking about a clean slater here or a first time offender who’s cooperating with the state, but this is a former gang member who turned Muslim for protection. He has a criminal record dating back to the mid-‘80s and already has life in prison for murder, yet the prosecution is hell bent on using his testimony just to meet their agenda.

The crazy part about this whole situation is that the prosecution is willing to reward this scumbag, lowlife, despicable rat with freedom in exchange for his testimony while knowing that he’s not reformed. This is just a slap in the face to those rehabilitated brothers who’ve been incarcerated beyond decades but who actually own a home and make a difference in their communities. Not to switch focus off of Royal D. Downs (Master Splinter), but I’m curious to know, without lying and snitching, when will these brothers get their chance at freedom?

And what about the brothers who completed every program that their prison had to offer just to get their commutations and parole hearings denied? Without lying and snitching, what else do these brothers have to do to prove that they are fit for society?

Also, what about the brothers who’ve been down 30-plus years who can’t participate in any programs because they don’t exist in their prison, but they’ve been infraction free for the last 20 years. Without lying and snitching, when will they get their chance at freedom?

And let’s not forget about the elderly revolutionaries who’ve been in solitary confinement since the assassination of George L. Jackson who no longer pose a threat to the institution or administration and can’t even get their state governors to wink at their pardon? Without lying and snitching, what do these brothers have to do to spend their last days with their grandkids and loved ones?

Better yet, what do these brothers have to do to get transferred to a different facility with better living conditions? I can go on and on about what the brothers deserve who are doing something positive and constructive with their bids without lying or snitching on somebody.

But what I’m trying to make clear to you is that not only is the criminal justice system broken and counterproductive in Amerika, but the government will tolerate any injustice to serve their own interests, even if the injustice requires allowing someone of Royal D. Downs’s caliber to testify in a criminal proceeding. Despite Royal D. Downs (Master Splinter) initiating and volunteering his services to be the prosecution’s ventriloquist dummy, unfortunately, he won’t be the only stool pigeon involved.

There are at least 20 more rats awaiting they deals to testify against us. Believe it or not, but about 90 percent of the evidence in our case is based solely on jailhouse snitches expecting leniency. Sad but true.

To touch on the transpirations since being wrongfully accused of those charges, not only have we become enemies of the state of Delaware, but we’ve been heavily targeted and retaliated against by correctional officers. The following atrocities are what we’ve been experiencing on a day to day basis: opened legal mail, untimely regular mail, unfollowed policies, tampered food, lack of medical treatment, lack of mental health care, disconnected phone calls, unsanitary shower, solitary confinement, neglect, falsified infractions, cancelled visitation (legal, too), physical abuse, verbal abuse, psychological abuse, and all forms of unprofessionalism in its entirety.

Those conditions are far from exaggerated and quite difficult to live under, especially with this case we have being held over our heads. Despite not allowing their stratagems and tactics to turn us against each other and affect our focus on beating this case, it’s evident that they’re doing whatever in their power to provoke us and get that violent reaction to support the narrative they’ve created against us as “cop killers.”

With us possessing the self-control of true warriors, we will never allow our emotions to supersede our intelligence by falling victim to their trap. However, this is strictly within our willpower to do and control.

Now what we can’t control is the media spreading this propaganda about us being cop killers based upon our previous convictions. That’s not cool. Nor can we control those pro-police protesters who are going to be inside and outside of the courthouse campaigning that we get convicted regardless of the insufficiency of the evidence.

This could train the minds and visions of jurors to where we won’t get a fair trial. This can’t happen! The 14th Amendment protects all American citizens, whether free or incarcerated. Once charged with a crime, you are innocent until proven guilty in a court of law.

In saying that, we’re making a nationwide public call to all those who are against racism, fascism, imperialism, capitalism, hegemony, bigotry, unethical prosecutions, rigged up indictments, hypocrisy and any other form of oppression that exists within the judicial system.

WE NEED YOUR SUPPORT! There has already been an extreme amount of injustice that’s taken place in our case, and we’re looking to get the people’s support before these injustices and violations continue into the courtroom.

We need as many supporters as we can get inside and outside of the courtroom to counter the attack from the prosecution and the state. We need everyone who can to contribute to this cause, whether it be posting messages on your social media accounts, making T-shirts with “Smyrna 17” on them, or just educating the people on mass incarceration and why prison uprisings happen.

We personally believe that your presence on social media and at the trial in the courthouse would be the most effective and beneficial contribution. However, we accept and appreciate all forms of solidarity.

Now to explain the scheduling, time and location of the trials: There are five different trials, and the individuals in each group are listed below with the scheduled trial dates.

For those who don’t know, just because a trial is scheduled for a certain time doesn’t necessarily mean that you will hear evidence that day. The actual trial doesn’t start until a jury is selected to weigh the evidence. In saying that, I believe it would be best to play it by ear. This case will be a media circus, so by watching the news you will definitely find out. 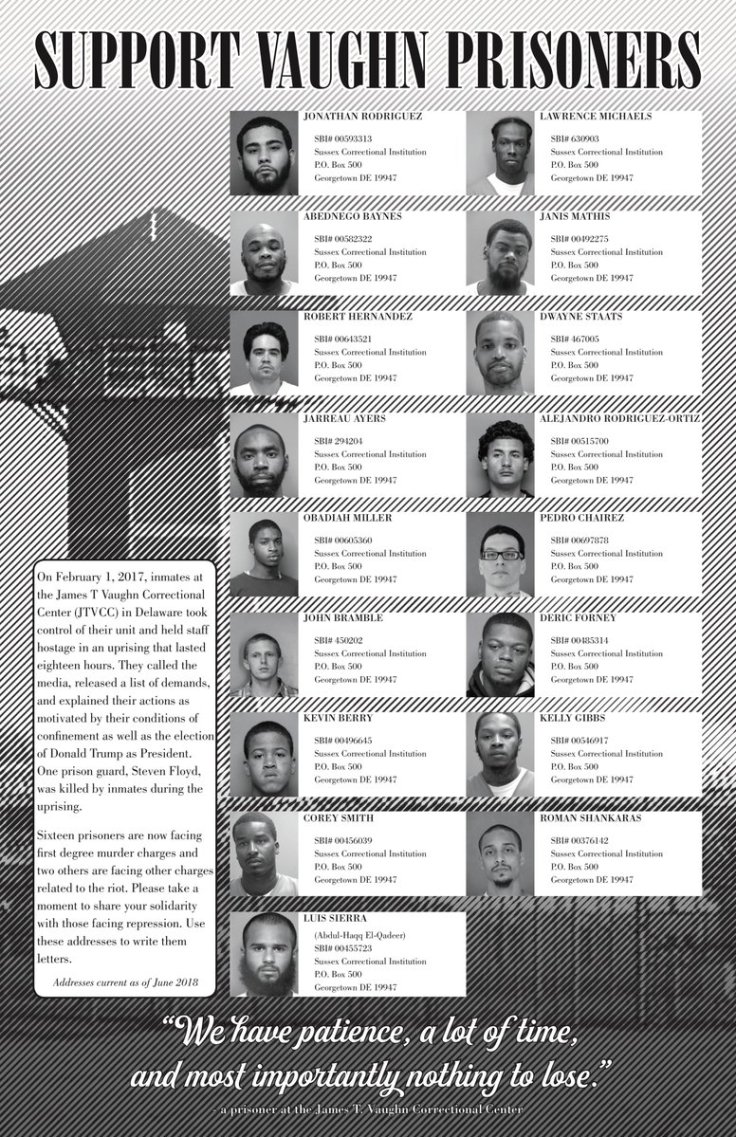 We are still looking for the address of Pedro Chairez, who we believe has been transferred to out of state from Pennsylvania and Delaware. Let us know if you know their new locations!